Australian Aid: way too much?

In 2016, a  survey of ordinary Aussies by the Campaign for Australian Aid found that most people believed the Australian Government was spending about 13% of our total budget on foreign aid.

“Way too high!”  the people shrieked.  “What about those in need here in Australia?  The homeless?  Our elderly?”

Fair enough. 13% is quite a lot… So if it were left up them, what did most people think was a reasonable percentage to spend on foreign aid?

On average?  Most people thought around 10% would be fair.

Say what? How much?  Yep: 10% of the Australian budget to be spent on foreign aid.

There’s a massive black hole between public perception and reality in the debate about Australian aid. Average Australians regularly state we give ‘too much’ to foreign aid.  Those same people think we should give ‘about 10%’. 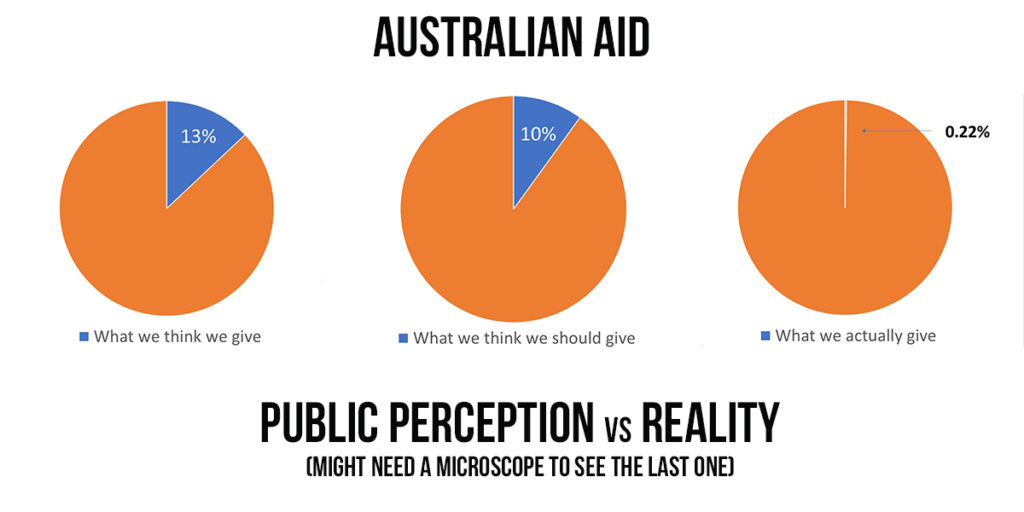 Australia actually gives much less than 1% of its budget to foreign aid and its getting less every year.

We give only 22 cents in every hundred dollars to life-saving vaccines, providing clean water and vital medical assistance.

Yet even such a tiny amount is helping us make some stunning progress toward overcoming poverty.

Australian Aid has contributed to much of this good news.

Imagine what we could achieve if we gave anywhere near the amount that average Aussies think is ‘reasonable’?

So how can you help create the change we need to see on this issue?

Right now, the Australian Government wants to know what you think of us. They’re prepared to support us with significant funding, but they want to know you’ll back us with your own money first, because you know us best. For every $5 they make available to us through Australian Aid Funding, we need you to show your commitment with a donation of at least $1.

This is a big opportunity to show the Australian Government you care about Australian Aid funding and want to see it increased. And it will allow us to make your gift go up to six times as far this end of financial year.  Please make your gift here – and thank you so much!

To see how your donation will change lives in powerful ways, watch our new video here.