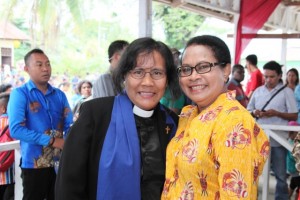 Make me a daughter of this land.

“Make me a daughter of this land because of my ancestry.”

These were the words of Rev Thresi Mauboy, Moderator of UCA Northern Synod as she joined me last month in the land of Papua and greeted 15,000 people at a church celebration in Manokwari capital of the province of West Papua.

Let me give you some context. 161 years ago the Gospel arrived in the land of Papua. Over the years, it transformed traditional, tribal culture into a Christian society. Whilst the journey was long and often filled with struggle, with time and the dedication of early missionaries, God filled hearts with the liberty of Christ.

Although the missionaries have left, God remains.

Since 1985, the Uniting Church in Australia has been a partner of the Evangelical Christian Church in the Land of Papua (Gereja Kristen Inijili Di Tanah Papua) (GKI-TP). Over the years we have seen how the church has become an abiding agency of the society. The church has a membership of 850,000, with 600 schools, one university and one theological seminary. Male and female clergies have reached equal numbers. Despite its difficult journey and deep struggle “like a sweet potato in between two rocks”, the church has represented the people to seek self-determination of their future. The UCA is with them on this journey. Along the way we see their witness. The Gospel is within the culture and among the people in this far eastern part of Indonesia.

The Moderator of UCA Northern Synod is the UCA’s first Indonesian-born moderator. As she returned to the land, she was welcomed by the Moderator of GKI-TP. Rev Alberth Yoku and during the celebration was greeted by Prof Yohana Susana Yembisethe, Minister of Women’s Empowerment and Children’s Protection, Republic of Indonesia. Both the church leader and the government minister welcomed Rev Mauboy with pride.

Australia is a close neighbour of Indonesia. The people-to-people connection is clearly evident on the Indonesian side. During our conversation the Minister explained her doctoral degree was from Newcastle University and she attended a Uniting Church while she studied in Australia. Coming from Biak Island of West Papua, she understands how women should be recognised as contributors of social good. She expressed the wish for Thresi to return again, and visit Jakarta as an Indonesian high achiever.

Rev Mauboy’s speech was cross-cultural in nature. She recalled her early experience in Indonesia and how the culture has shaped her in those formative years. Now as a UCA minister she spoke about how God is working between cultures and peoples.

During her speech Thresi declared “I am a daughter of this land”.

“God sent me to Australia to continue the mission from Otto and Giesler to proclaim the Gospel in Australia. Now I return as a bridge between cultures and peoples. I belong to you and you are my people”. The crowd responded with loud acceptance.

This is a telling story of a first generation of migrants. We struggled in between cultures. Our past cannot be undone, and our living in Australia has shaped a new identity. When two identities can either be both affirmed or both rejected, we have no option but to live with the tension and hold them together with our own life. And this struggle has also been transformed into a gift to build a bridge between the distance.

Two years ago UnitingWorld attended the same celebration. At the time we began to renew and reaffirm our partnership. Today we are here again, being welcomed in as close friends. Rev Alberth Yoku, Moderator of the GKI-TP spent much of his valuable time with us and made plans to visit Australia for the first time in his term.

Before our departure he gave his surname ‘Yuko’ to Thresi Mauboy.