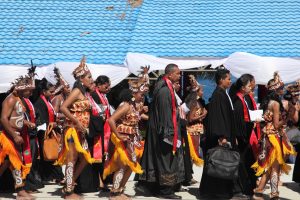 “We ask for congregations across Australia to hold our partners in prayer as they lead their church towards God’s justice, peace and reconciliation”, said Mr McMillan. Mr McMillan was responding to a letter written to the Uniting Church in Australia and other international partners. In the letter, our partner the GKI-TP has condemned the increasing levels of political tension in the Indonesian provinces of Papua and West Papua, and has asked for prayers and assistance from its international partner churches.

The GKI-TP outlines four issues it believes must be addressed to reduce political tension and avoid conflict in Papua:

1. Freedom of expression: Throughout May, more than 2000 people were arrested and arbitrarily detained across Papua, including the mass arrest of more than 1700 people in Jayapura for publicly stating their political views and requesting a dialogue with the Indonesian Government. The GKI-TP calls for a commitment to peaceful dialogue, the lifting of media restrictions and respect for freedom of expression.
2. The monopolisation of their region’s natural resources by transnational companies keeping the wealth out of the hands of indigenous Papuans and denying them the opportunity to determine their own development.
3. Alleged human rights violations including assassination, torture, rape and kidnapping, particularly directed against peaceful activists. GKI-TP is calling on the government to resolve cases of human rights violations through the independent national Human Rights Commission (KOMNAS HAM).
4. Greater respect for the ongoing debate in Papua regarding the history of its integration into Indonesia. The GKI-TP requests that the expression of their political views not result in violent crackdowns and unlawful arrests.

“The Uniting Church celebrates Indonesia’s cultural diversity through our extensive church partnerships with Indonesian churches, and that diversity has enriched the life of UCA widely as many Indonesians have found their home in our Uniting Church,” said Mr McMillan.

“However, we are deeply troubled by the situation in Papua as expressed by our partner church.

“We express solidarity with GKI-TP, in its ministry of peace and reconciliation, and in its call for all Papuans to be granted an effective voice in determining their own futures.

National Director for UnitingWorld Mr Rob Floyd said the Uniting Church in Australia greatly valued the courage and commitment of its church partners in Papua.

“The GKI-TP provide wonderful ministry in Papua often under the most difficult circumstances.”

Echoing the concerns raised by GKI-TP, Mr Floyd said, “We call on the Indonesian Government and all parties to make a commitment to peaceful dialogue, an end to violence and a respect for freedom of expression.”