We’re crowdfunding to get Syrian kids back into classrooms 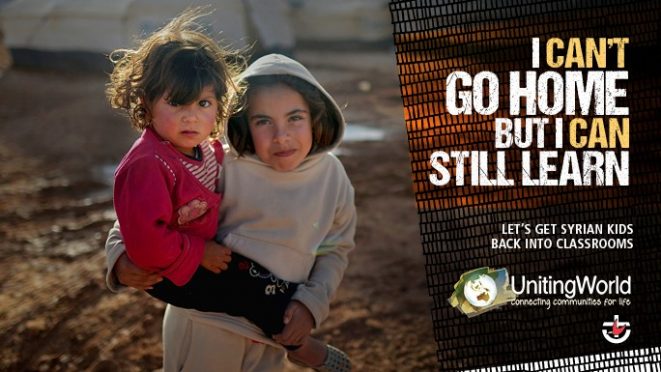 One in every five people currently in Lebanon is a Syrian refugee.

Yes, you read that right.

Lebanon hosts the largest percentage of refugees in the world given its population, with over one million Syrian refugees registered in a country with just 4.5 million citizens. All these people living in an area less than a quarter of the size of Tasmania.

Over half of the refugees are children, and 48% of them aged 6-14 are out of school.

The influx of new arrivals fleeing the conflict and persecution by Daesh (or “ISIS”) militants has put an enormous strain on church and government services, particularly educational institutions. In response, the government of Lebanon has restricted Syrian children’s access to state schools, making the role of the church schools more important than ever.

UnitingWorld has launched a campaign to support Syrian refugee children get back to school.

Through our networks, UnitingWorld will support churches in Lebanon to provide education for more Syrian children and prevent them falling further behind in their education.

This exciting new campaign has grown out of the Uniting Church in Australia’s desire to help churches in Lebanon support new arrivals from Syria.

Recently, the UnitingWorld communications and fundraising team were privileged to sit with members of Bankstown Uniting Church and newcomers from Syria, to listen to their experiences of fleeing their home country into neighbouring Lebanon, before resettlement in Australia. They all spoke about wanting to do something to help their friends and families still in Syria and Lebanon.

With your help, together we can make a big impact for the children of Syria.

How you can help