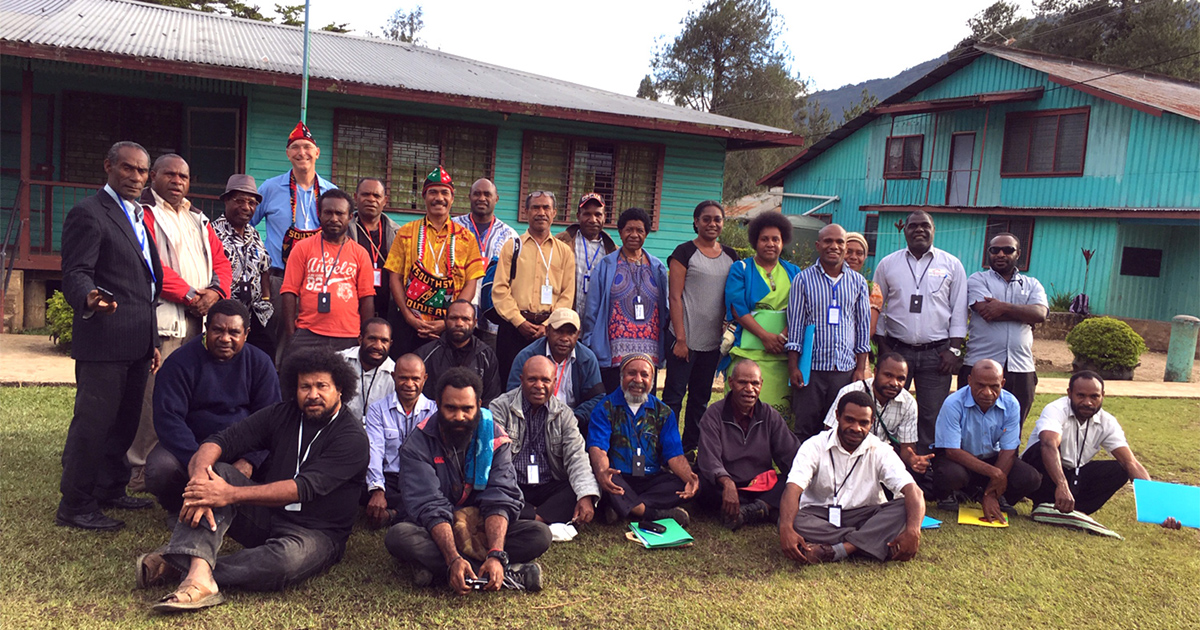 At 3:44am on 26 February 2018, Papua New Guinea experienced a 7.5 magnitude earthquake, with its epicentre in the Southern Highlands.  The initial quake and landslips resulted in 160 deaths and many more injuries.  In the days and weeks that followed, severe aftershocks and landslides caused many more deaths.

The quake caused widespread destruction of property and infrastructure; including roads, houses, rupturing of tanks and pollution of fresh water from underground oil and gas leaking into streams from below. The human cost was immeasurable. Along with the loss of housing, shelter, water and food supplies, people were deeply shaken emotionally.  Aftershocks left people afraid to sleep in what was left of their homes and communities. Already facing poverty and lack of resources, in the aftermath of the massive earthquake social fragmentation and tensions quickly reached boiling point.

Even today, the Papua New Guinea highlands are very remote. After a plane flight from Port Moresby to Mount Hagen, it took nearly three hours by four-wheel drive on heavily damaged roads tracking through rainforests, mountains and villages to reach the township of Mendi.  On arriving there I was given a tour of the town.  It is a beautiful place with lush, tropical growth, surrounded by banana plantations and you can see mountain tops hidden in mist.  Even so, signs of the earthquake were clear.

Dark stripes on mountainsides showed where the earth had slipped. Houses were sitting squat and bent on the ground where their piers had collapsed and the local hospital still had walls missing.  There were signs of human-caused damage as well.  I was shown where the police station and courthouse had been razed by arson and where a passenger plane was destroyed; all this during riots in the town that had followed the earthquake.

Mendi was a fitting venue for UnitingWorld to organise joint training courses for pastors from the Highland provinces, where the church is at the forefront of social integration and care.  Following the earthquake, churches worked alongside government and not-for-profit agencies to help cater for basic needs and continue to be the prime provider of psychosocial support and mediation in conflicts.

The earthquake struck while I was working with UnitingWorld supporting our partners in Tonga following Cyclone Gita.  For some time, access was too restricted, and priority was given to basic human and social needs across Papua New Guinea.  It took months of logistical challenges (including access, funding and people involved) to bring everything together for the workshop in September. This turned out to be good timing, as any earlier it would have been difficult for primary pastoral carers and leaders to get away from the needs of their people.

The workshop was attended by over 25 participants, with the week divided into two segments: disaster recovery and trauma counselling, followed by sessions on peacebuilding.

The Disaster Recovery and Trauma Counselling was facilitated by myself and Lua Alu, a counsellor who works throughout Papua New Guinea and specialises in counselling on stress, conflict and sexual violence.  I was able to bring a framework to the workshop with input on disaster dynamics, trauma, critical incidents and debriefing.

The second part of the week focused on peacebuilding and was led by the United Church in Papua New Guinea (UCPNG) team, an extraordinarily gifted group of people with extensive first-hand experience in negotiating warring groups to lay down their weapons, find forgiveness and extend peace.

These two elements melded seamlessly, with the first giving an understanding of post-traumatic reactions, symptoms and care, and the second giving a platform on practical ways to move forward in reconciliation.

The workshops were a time of great refreshment for all involved.  They provided an opportunity for pastors to come away from situations of ongoing stress in the provision of pastoral care and share with brothers and sisters in Christ; being equipped and affirmed, ready to return to the difficult ongoing work of supporting their people.

I came away blessed by the kindness, hospitality and warmth shown by our local partners to a stranger from Australia.  I learned a great deal as I taught and shared with these dedicated people.  As I prepared to leave, many urged us to thank the people of UnitingWorld and the Uniting Church in Australia for this time, and to ask the church to remember them, recognising that – even now – they continue to face enormous challenges in caring for communities still fragile from the impact of the earthquake.

You can support the work of UnitingWorld and our local partners, helping communities be better prepared for disasters, saving lives and providing critical care in the aftermath. Click here to make a tax-deductible donation today.

UnitingWorld acknowledges the support of the New Zealand Ministry of Foreign Affairs and Trade.