Fiji: when cyclones shake the world, the Church shakes it back. 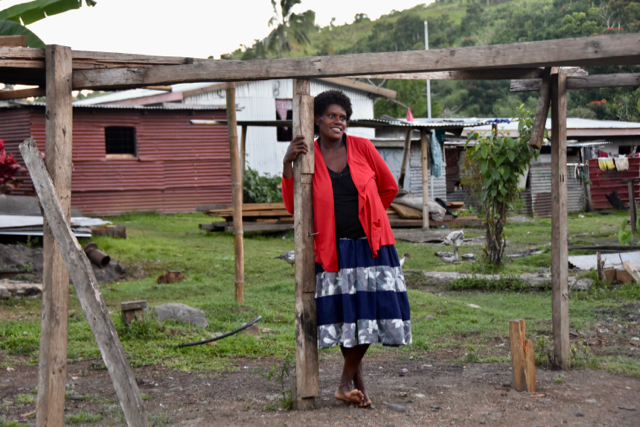 It doesn’t matter where I travel across this world of ours – China’s lakeside Colleges, India’s dusty villages, a storm-chewed community in one of Fiji’s most lush northern valleys – it’s always the mothers who sidle up to me for a chat. Maybe I’m a bit unusual – the white woman grinning at their kids among the men who come here as dignitaries, diagnosticians or dispensers of cash. These women hold quiet power in their communities – they’re tellers of stories and keepers of knowledge. And they’re keen to connect.

Today it’s Anna: mother of two, intelligent, articulate and gently spoken. She talks about her village, Nausori, squeezed tight in Cyclone Winston’s fist as houses and people alike are shaken and stirred. Her sister’s home was taken apart while the whole family ran, taking nothing with them, to a neighbour. They still live there today. Anna’s sister is pregnant. The government has stepped up, but with more than 60,000 people left homeless in Fiji after Winston, the job is huge.

This is what’s left of the family home.

As we talk together, women gather in the nearby church, praying and singing. Their voices drift across the valley, right on dusk, and I wonder yet again about the place of faith in this country. The majority of people are believers of one kind or another, although the traditional Christian denominations have recently lost some ground to other flavours, from the spice of Pentecostalism to Adventist wholefoods. Hindus have always existed reasonably happily alongside the majority Christian population, and so have Muslims. It’s hard to say what they all make, collectively, of the constant battering the Pacific takes from natural disasters. Fijians – and you’ll know this if you’ve been there on holiday – are a friendly, laid-back people. They pitch in. They accept life. And they love their church.  Why?

Because the church stands strong when everything else is shaken.

We’re helping this village and others “Build Back Better” – hat tip to Australian Aid through the Department of Foreign Affairs and Trade. UnitingWorld’s support happens in partnership with the local church, which is respected and revered. It’s not Australia. There’s little scepticism here. In fact, the sight of a shattered church high on the hill in the middle of a village is so demoralising for Pacific people that it’s often repaired first – a defiant sign that the phoenix rises from the ashes. The local church is a place of respite not only for people in need throughout the year, but people shelter in her arms during cyclone and storm. It symbolises strength, unity and the certainty that something bigger is at play in the universe. As we leave the village in the growing darkness, children are playing outside the church, where light spills from within and prayers are rising. It’s not even a Sunday.

Churches in Fiji are taking the lead in the “Build Back” campaign – not just in the obvious ways, with bricks and mortar, but assisting with long term plans to plant the right crops for the changing climate so that communities can stay in rural areas, helping train carpenters so that the ‘drain’ of skills to the city doesn’t continue.  God’s people are determined to get on with the business of living in ways that demonstrate the hands-on approach of Jesus, proof that God is alive and well in the Pacific.  This is a culture where faith is still central – the Bible is the ‘go to’ for everything in life and the church is a genuine change maker in society. Call it gospel living, call it what you like. People of faith make a difference.  The Pacific church restores hope, sets a light on a hill, rebuilds what is broken, sorts out practical stuff like where to find food and comfort. In short, the church is a mover and a shaker.  And people respond with love.

That’s why we continue not only to learn from our Pacific neighbours, but to draw hope from their example.  So many of our people over the years served faithfully in the Pacific as missionaries – in word and deed.  This is their legacy.  So many Pacific people now find their homes within the Uniting Church of Australia, sharing their gifts with us.  Our bonds are strong.

Please share the news of our most recent project together:  saving lives by preparing communities to withstand disasters before they strike.  $1 invested now can save $15 in the aftermath of a cyclone, storm or flood.  Every dollar adds up.  Please give if you’re able.