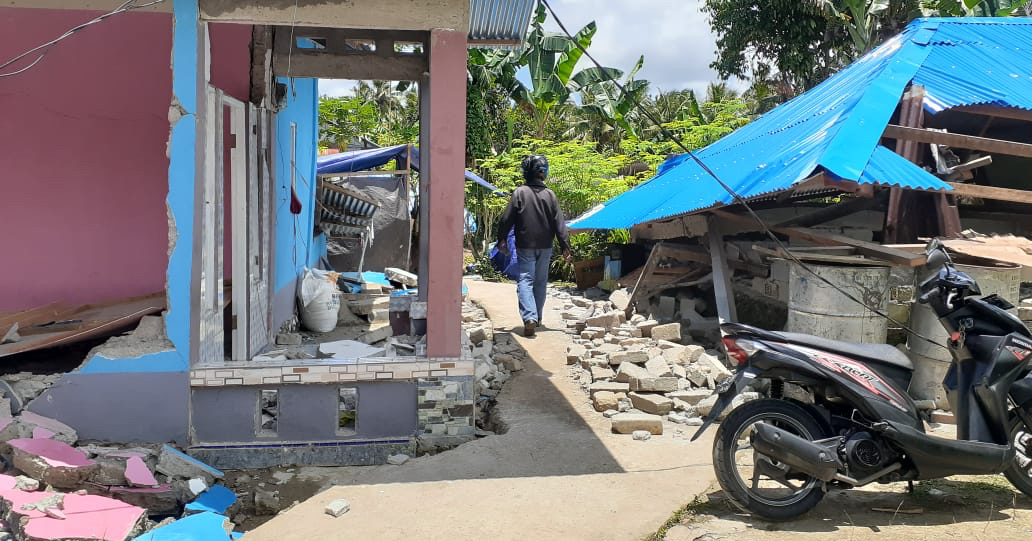 A prayer during times of disaster

A Prayer During Times of Disaster

Leader: We come before the God of compassion who aches with those hurting in the world,

and before the risen Christ who heals. We stand in silence and offer up our prayers.

As the candle is extinguished, we acknowledge the darkness that disasters bring to the lives of many.

All: God of mercy, love and compassion

Christ who enters into the pain of the whole creation

We cry out to you for all the suffering people of the world,

and especially today the victims of natural disaster –

the dead, the injured, the bereaved;

and those who have lost everything and their livelihood.

All: God of mercy, love and compassion

Creator who calls us to care for people and the earth,

Fill us with love for our neighbours that we may know

the encouragement that comes from solidarity

Give us the wisdom to act; generosity, courage and unity

Most of all we pray that the God

of all comfort and renewal will be powerfully present

In and through your people

In Christ’s name we pray. 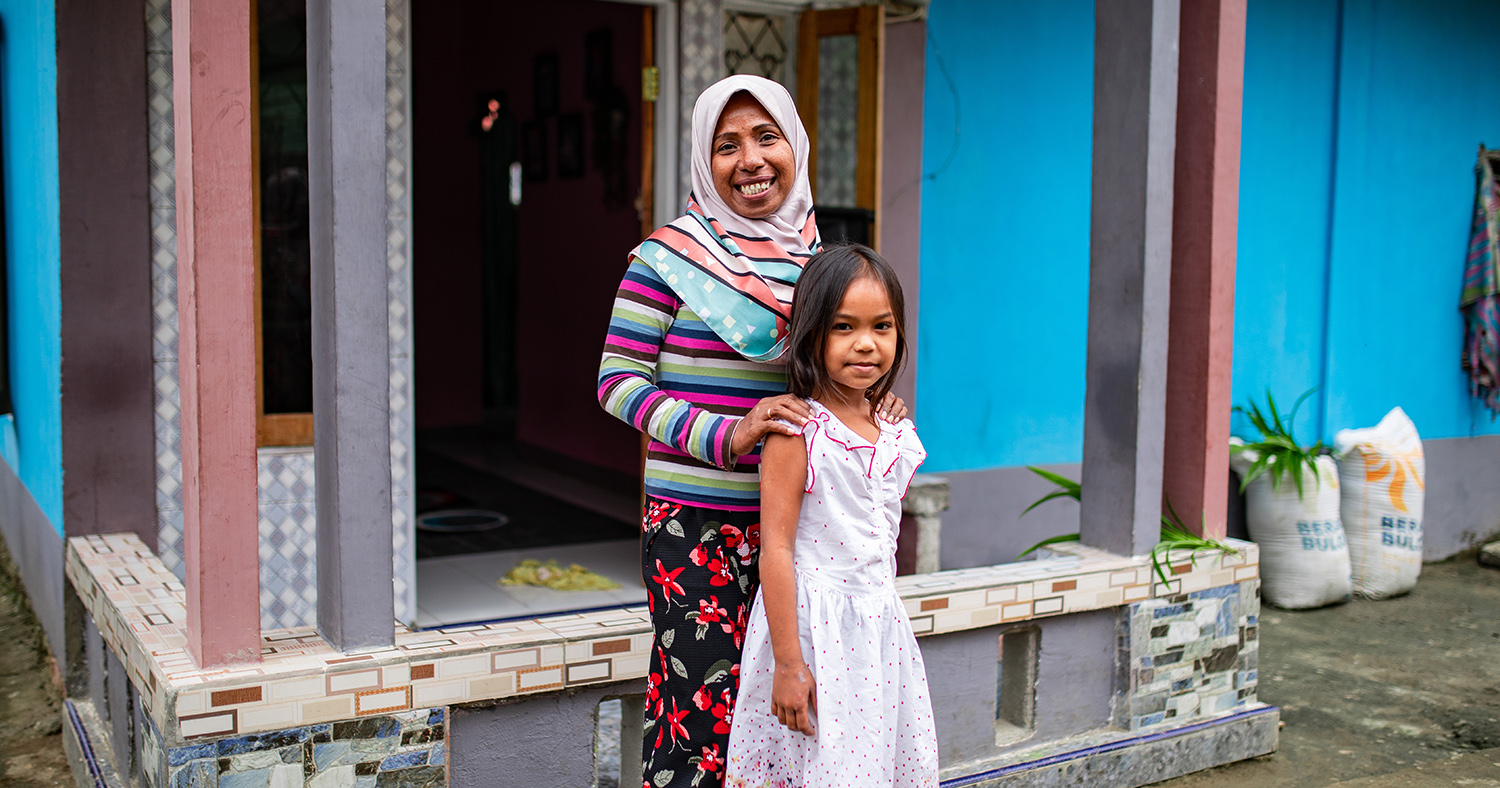 Up close, you can see the brush marks in the walls of Attika’s house. The rendered concrete has been painted by hand – pink inside, bright blue outside.

All over Ambon, Indonesia, the houses are a defiant dazzle in a place where you might easily expect pain to have completely stripped the colour from life. It hasn’t.

Conflict between Muslims and Christians here in 1999 killed 5,000 in hand-to-hand fighting and left 70,000 people homeless. Attika, who fled her village during the conflict and lived for years in a refugee camp, could scarcely imagine ever speaking with a Christian again, let alone working beside women who have since become her closest friends. The transformation is the work of the Protestant Church of Maluku, who’ve been running projects in Ambon that bring Muslims and Christians together to beat poverty and build peace. Their story is one for the ages.

Attika’s smile is radiant as she shows us the home she built with $5.00 a week saved from a business built as part of a group of Christian and Muslim women run by UnitingWorld’s partner in Ambon, the Protestant Church of Maluku. Expressed differently but closely held, the women’s faith in God bound them together as they rebuilt homes, lives, each other’s churches and mosques.

Rev. Jeny Elna Malupane, who coordinates the project in Ambon, says that the work of peacebuilding is central to our identity as God’s children.

“I see the way life is changing for people in the community,” she says. “This is how I see God at work in humanity. It is incredible, actually. It is like nothing else, this grace of God bringing people together.”

A month after we return from Ambon, a series of devastating photographs arrive here in our office. They show Attika’s home completely destroyed by three earthquakes that hit the island in September; in one photo, Attika sits among blue and pink rubble, still selling her home-cooked snacks.

We gaze in silence at the two sets of images of Attika’s home, side by side, and I struggle with the idea that in both, God is present – in and through the relationships that have been built. Jeny’s team, through the Church’s Sagu Salempeng Foundation (SSF), is already on hand providing supplies to people living under tarps in the forest, too frightened to return to their homes. Jeny’s own family are among them.

“People are resilient,” Jeny says. “They dig deep. And they see God providing for them, even in this tragedy. The women’s groups have already been there for one another, sharing their food and resources: Christians, Muslims. They have become like family.”

And again, I’m reminded that in a world of pain and suffering, God’s intimate and powerful act was to come close as a child named Emmanuel: “God with us.” Born into the reality of our lives, sharing our existence, experiencing our hunger, sorrow and even our death. This is the God who is ever-present. This is the God who also, ultimately, overcomes.

God does not do this work alone. ‘God with us’ calls us alongside in partnership as we work toward the love that conquers death. For Attika, for Jeny, for every person digging deep to rebuild a life of dignity: please join us in giving the hope that holds us together this Christmas.

They’re available at www.everythingincommon.com.au and you can send digital gift cards to loved ones right up until Christmas. Call us on 1800 998 122 to order gifts or donate this Christmas season. 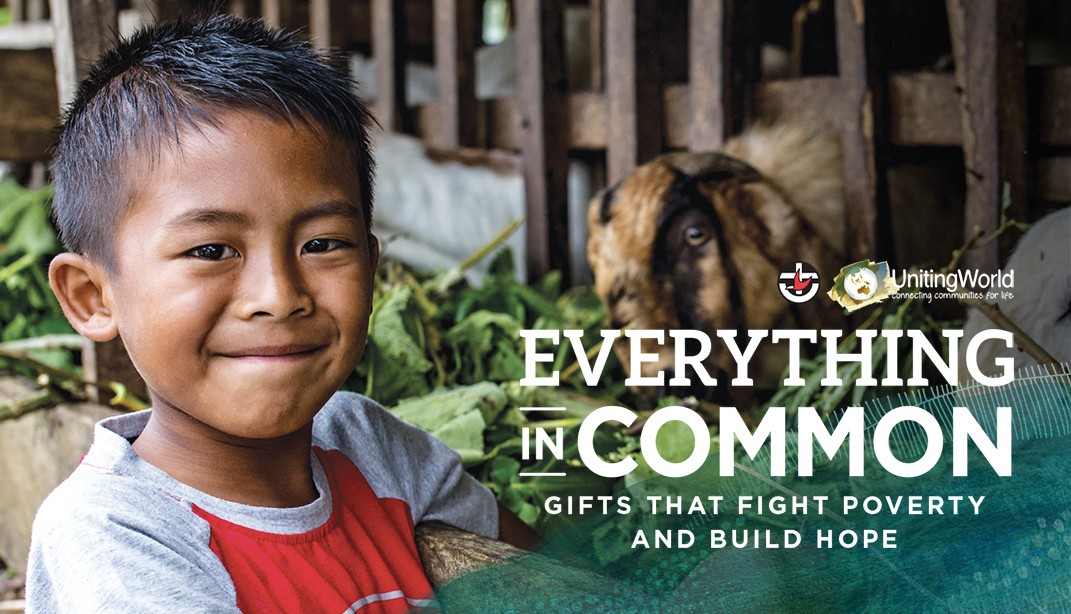 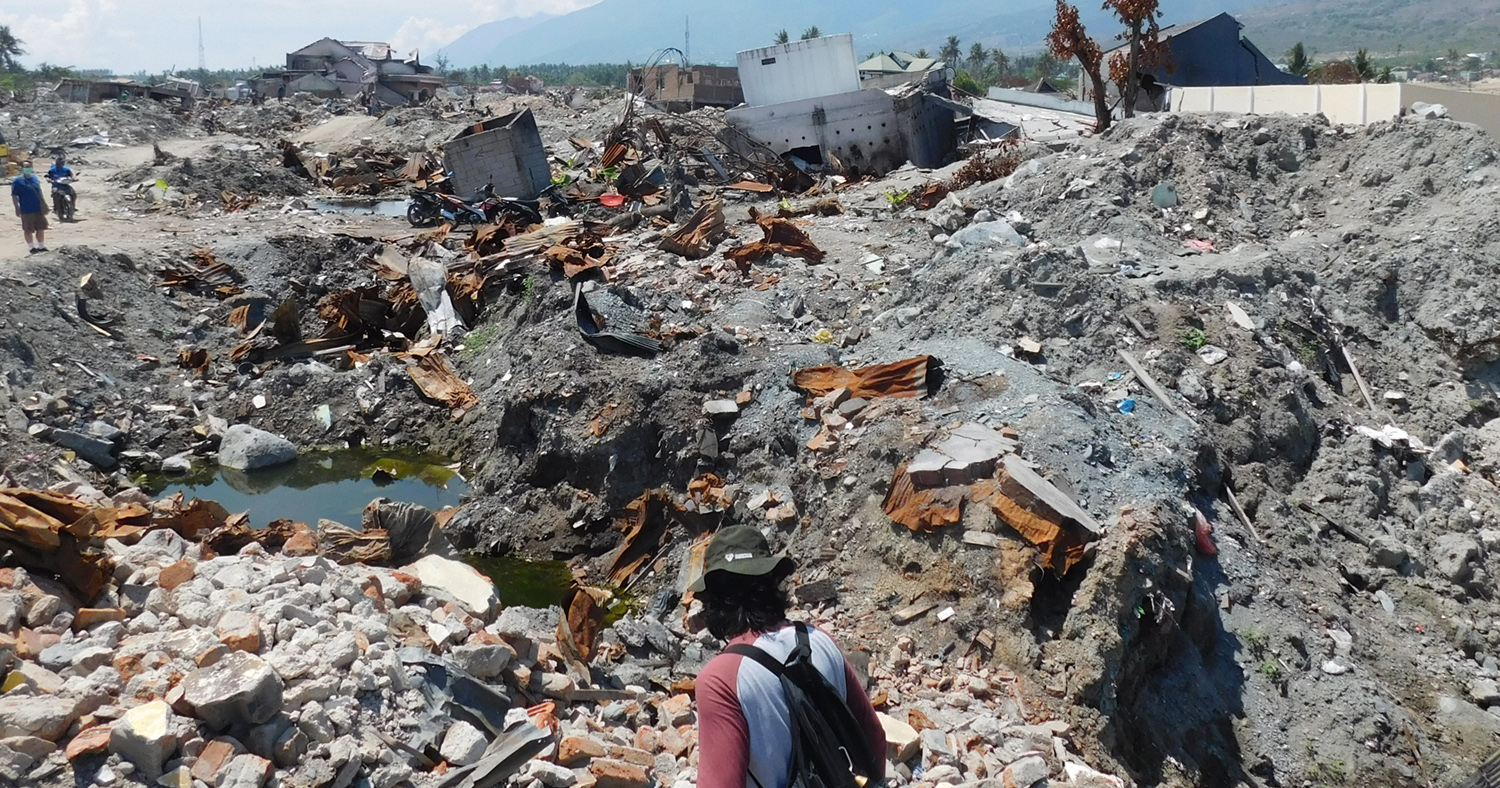 Thank you for supporting our neighbours in Sulawesi

Six months have passed since the deadly earthquake and tsunami that devastated the coastal city of Palu on the Indonesian island of Sulawesi. 4,340 people were killed and more than 200,000 were displaced from their homes. Our Indonesian staff and church partners lost friends and loved ones.

Thank you to everyone who supported our emergency appeal.

Your donations allowed our partners in Indonesia to provide necessities for people struggling through the crisis: food and clean water, milk for infants, sanitary supplies for women, shelters, mattresses, mosquito nets and cooking equipment for 86 families.

Your gifts also helped our partners be able to provide health care and psychosocial support to people traumatised by destruction and loss. Using local church buildings, our partners ran training for Sunday school teachers to help them understand post-traumatic reactions and be better able to offer care for children.

Our partners also provided handicraft activities for refugees who couldn’t return to their destroyed homes or jobs right away, giving them a small source of income and something else to focus on besides the destruction.

The disaster response was church partnership in action, with churches from Bali and Sulawesi working together to help vulnerable people who’d lost everything – made possible by the support of people and churches in Australia and Indonesia.

Thank you so much for being part of this transformative partnership!

You can help vulnerable communities be disaster ready

We’ve launched an appeal to help our partners be better prepared to respond to disasters like Sulawesi. The key to saving lives in a disaster is preparedness, and we want to help vulnerable communities be disaster ready. Find out more.

Your donation will go a long way. Every $1 invested into disaster preparation saves up to $15 in the aftermath of a tragedy.

Your gift can help vulnerable communities build resilience to disasters, equip and train disaster response staff and volunteers, prepare shelters and evacuation plans and increase the capacity of our partners to provide emergency support and pastoral care.

Fiji’s recovery from Severe Tropical Cyclone Winston is a great story of what partnerships can achieve:  partnerships between government, local church and people from all over the world, including Australian Uniting Church members who provided over $500,000 toward recovery efforts.

Six months on, we look back.

When Severe Tropical Cyclone Winston hit Fiji on 20 February, 2016 it was one of the strongest category-five cyclones ever recorded in the Southern Hemisphere. Winds over 300 km per hour flattened villages and cut a path of destruction across the country, taking the lives of 42 people and displacing more than 62,000. At the height of the disaster, there were more than 120,000 Fijians in need of urgent humanitarian assistance, and more than 540,000 were affected by its impacts.

At least 28,000 houses were damaged or destroyed, and in the hardest-hit towns, up to 90 per cent of structures were completely destroyed. In just one night the cyclone caused over a billion dollars in damage (approx. half a billion USD).

Fiji was well prepared, with vital disaster management measures in place before the storm. Early warning alerts and disaster mitigation policies saved countless lives. People were able to get to

evacuation shelters well in advance – most of them in schools, churches and community halls.  In cooperation with church networks, government services communicated effectively to get the word out about where and when people should move.

After a state of emergency was declared, relief began to be distributed and countries around the world pledged their assistance, including Australia. Our partner, the Methodist Church in Fiji (MCIF) immediately organized a fundraising drive within the country, asking for donations and goods from people in unaffected areas. People generously helped their neighbors, sending in food, clothes, blankets, cooking utensils, kerosene stoves and lamps, solar lights, and other essential living items.

The MCIF then organized hundreds of volunteers and Methodist youth to help sort and distribute goods in the days following the emergency, ensuring the relief supplies were quickly transferred to where they were needed most.

After setting up an office to coordinate disaster relief and responses, the MCIF used their existing church networks to assist the Fijian government in assessing and mapping the extent of damage across Fiji. Building assessment teams were then deployed to identify where to allocate resources for the recovery efforts.

Working closely with the Ministry of Agriculture, the MCIF has been purchasing food crops and helping people re-establish their livelihoods.  The Church is also working with civil society organisations on long-term disaster risk reduction strategies.

The work of the MCIF has been helped by the generous donations of people in Australia. In response to an appeal launched by UnitingWorld, Australians raised over $AU 500,000, which is going a long way in the rebuild and recovery efforts. MCIF are committed to a ‘build back better’ approach, ensuring new buildings are more resilient to extreme weather events.

The spirit and perseverance of the Fijian people never faltered, even as Cyclone Zena closely followed Winston, threatening to make relief efforts even harder. Miraculous stories highlighted their courage, like the women of Naveiveiwali village, “heroines” who saved 22 lives.

A social media campaign quickly sprang up in the aftermath of Cyclone Winston. The hashtag ‘#StrongerThanWinston’ started to feature in all that related to the disaster recovery, a rallying call for a strong and resilient people not to despair – and a reminder that together they would overcome the odds.

Thank you #Australia for you help in our time of need #Fiji #StrongerThanWinston #TCWinston https://t.co/UwNgAM2wCP

Six months on, this strength and character were on show at the Rio Olympic Games, with their Rugby Sevens squad routing every team they faced to win Fiji’s first Olympic gold medal! When the final whistle blew, the Fijians boldly sang a hymn together in the middle of the field with characteristic Polynesian harmonies.

There are still many challenges facing the people of Fiji as they work to rebuild. Thousands lost their homes and their sources of income. Many are struggling to access food and essential infrastructure after it was wiped out, and is yet to be rebuilt or repaired. Remote communities have been especially slow to recover, with fewer supply runs reaching them. It is unclear how long it will take for Fiji to fully recover, but they they are well underway.

We are grateful to God for His love in helping us in rebuilding the lives of the victims across Fiji. It is anticipated that it will take 4 to 5 years to recover from this situation and I appeal to you today that we need to stand together and work together – Rev. Dr. Epineri Vakadewavosa, General Secretary, Methodist Church in Fiji.

Thank you for helping the Fijian people get back on their feet by supporting the great work of our partner, the Methodist Church of Fiji. As the partnerships agency of the Uniting Church in Australia, we’re heartened to tell you this story of people working across all sectors to build back better.

Please continue to pray for Fiji and the work of MCIF. You can continue to support their work by donating here.

Cover photo by Fiji Government
Other photos by MCIF