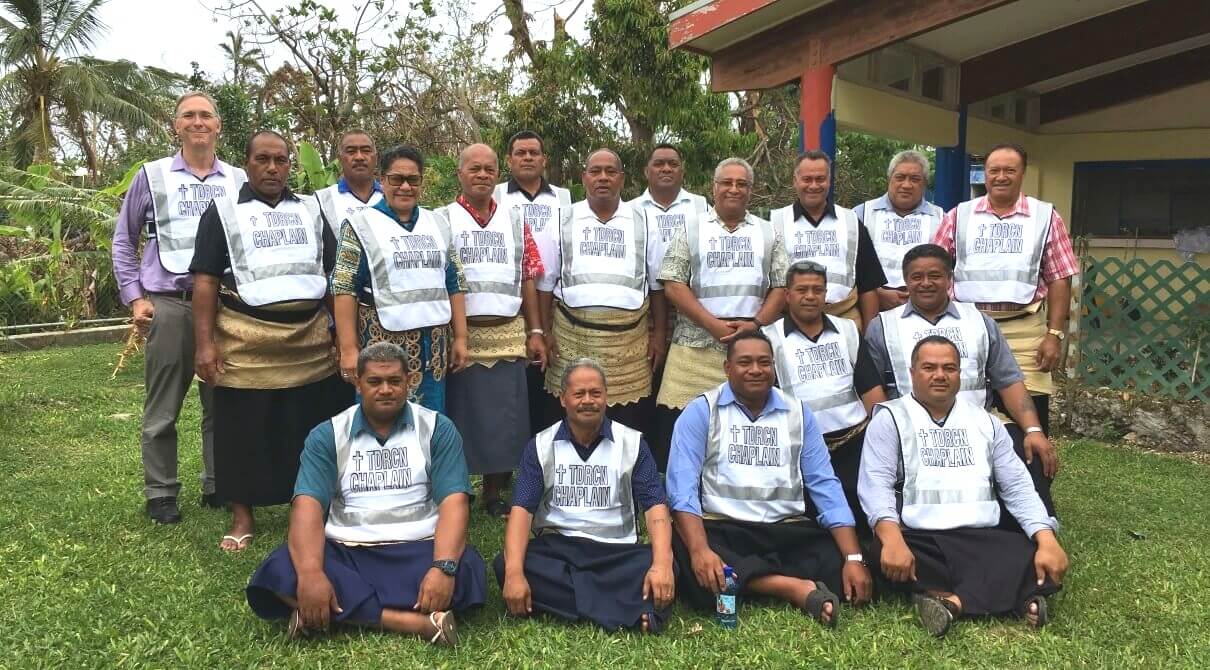 As the plane lifted off from the Kingdom of Tonga, I had a familiar twinge of the heart as the island left my line of sight. While I was returning to the comfort of my own home with reliable power, phone and internet, and clean water, there are so many people in Tonga that won’t have access to these things for some time.

On Monday 12 February, Tropical Cyclone Gita devastated the islands of Tonga, with winds of 230km/h whipping the Southern Coast of the main island of Tongatapu. Locals had taken warnings seriously and prepared as well as they could, but lightly built houses were no match for the monster storm. The fact that it struck at night probably saved scores of lives, as people were bunkered indoors and avoided injury from flying roofing iron and falling trees. The negative is in the lasting memory of families who huddled together through the terror of a sleepless night of pitch darkness and screaming wind, hoping and praying their place of shelter would hold together.

With the dawn’s light, people ventured out to assess the damage and found this particularly confronting. Many houses lost all or part of their roofing, torn metal and splintered wood, thousands of trees felled and palm fronds scattered. Rain continued to inundate many houses that had escaped the worst of wind damage.

Power poles leaned precariously or snapped off completely, and power lines lay across muddy roads. In the centre of the main city of Nuku’ Alofa, the walls of Parliament House were blown out and the roof crumpled to the ground, a state of emergency was declared which included curfews to keep people from the CBD as many shops were emptied of ruined goods.

There are no cyclone shelters in Tonga so while most people remained in their homes during the storm, the most solid gathering places are in the church buildings that play a prominent role in Tongan community life. The people’s faith in their church communities means there is a place to come together and share their experiences of loss and hope.

Red Cross, Caritas and other groups are doing important work in delivering supplies to the most affected – food, water, and temporary shelter, but it is the churches that are at the forefront of bringing the community-building psycho-social support which will restore hope.

I flew into Tonga two weeks after TC Gita with Rev. Nau Ahosivi. Nau is a Tongan-born minister in placement at Concord Uniting Church. It had been our second trip together; the first – in 2015 – also had Rev. Alimoni Taumoepeau. This first trip was an initiative of UnitingWorld, at the request of our church partner, the Free Wesleyan Church Tonga, to train a network of chaplains to support people in the event of disaster or crisis.  From this first training course, which included a ‘train the trainer’ component, the Tongan Disaster Recovery Chaplaincy Network (TDRCN) was born.

The training course is an ‘islander’ variation on that used in NSW/ACT and South Australia. It has also been used in supporting the churches in Fiji and Tuvalu. It covers a range of subjects including: the nature of disaster, how it affects communities and people, how people react and are affected by critical incidents and trauma, calming and communication techniques, vicarious traumatisation (how the carer can be affected by the work) and self-care.

After TC Gita hit, the Free Wesleyan church deployed the chaplains we had trained in 2015. Valuable work done by Michael Constable of UnitingWorld had assisted them in pre-disaster preparedness, mapping the areas of need and making assessments. Chaplains were able to respond to people who needed them most, but this was not easy for them as conditions were far from ideal. The weather this time of year is hot and steamy. The cyclonic winds had dropped to dead calm and the heat and humidity from the water brought with it discomfort and the threat of mosquitoes bearing Dengue Fever and the Zika Virus. The chaplains spoke of how shocked they were by the damage to both the natural environment and the villages they visited, of talking to people as they sat under plastic tarpaulins or in the tents in which they now live. The chaplains themselves have stresses in their lives, many having endured the cyclone and having their own homes flooded, before leaving to care for others.

Our first afternoon with the group involved debriefing these chaplains, allowing them to share their experiences and process them together. The next two days were spent on the training which melded their understanding with the context of their experience.

The church had requested identification vests for the chaplains which allowed them to (as with other aid workers) show who they are and what they are doing. I was able to work with a local Sydney manufacturer who put in extra hours and made these from white cotton (allowing for tropical heat) at less than cost price, donating the cost of their labour to support the effort. The chaplains are out again, working in teams, supporting local ministers as they visit and listen to cyclone-affected people.

I have been working in the area of emergency ministry and disaster recovery for some time now.  Ordained in 1993 and becoming a Rural Fire Service Member and chaplain in 1996, I have worked in in the Welfare area of the state response for many years. In 2007 I helped to establish the NSW Disaster Recovery Chaplaincy Network which I continue to oversee (this is a ministry of the UCA NSW/ACT Synod). In my role as National Disaster Recovery Officer, I support the development of disaster recovery preparedness and response from the church and its agencies. I work with the Synods in supporting the development of ecumenical disaster response chaplaincy, peer support (looking after ministers working in communities affected by crisis) and supporting disaster recovery long-supply placements with Presbyteries, assisting community recovery.

I am acutely aware that disasters come and go with the nightly news. A cyclone hits, a fire damages a community, an earthquake causes loss and damage, and then something else happens. We may be mindful for a time – but then a new crisis demands our attention. This is an understandable reality.  The problem is that, for the people involved, recovery may take years and their needs actually intensify over the first six months to a year – as their lack of resources and frustrations become more apparent. This is when they need sustained support. How can we best support the sustained effort?

Prayer is mightily important. I had some conversations with people of the church who spoke to me about how important it was to them that they were remembered and supported in prayer by the brothers and sisters in Christ from nations far away.

Giving is vital.  Often our first reaction is to gather goods, clothing and food to send. I believe this comes from a need to send something tangible to people. Unfortunately, this has its limitations: what is sent is not always needed. There is, at present, no food shortage in Tonga, while some crops were damaged, fishing continues and supplies from New Zealand and elsewhere continue to flow unabated. Donated goods may actually damage the local businesses and economy; for every item sent from Australia, a local Tongan business will lose a sale and locals may lose work. Containers cost money to send and fees at the wharf. They also take time to empty and sort. During my time in Vanuatu after Cyclone Pam, they spoke of the wastage of time and effort in transporting and emptying the containers.

The greatest need at the moment is cash that can purchase new building materials through local suppliers, employ local workers and support a damaged economy.